iSky Research today conducted a thorough reexamination and audit of the Commonwealth Bank's Apple based (iOS/OSX) digital banking channels, including the desktop web (OSX Safari), mobile web (iOS Safari), mobile app (iOS), tablet app (iOS) and SMS. As this was the first time that we had audited the bank's tablet app, there was no basis of earlier comparison - however we have noted below features that we felt were unique, different or otherwise worthy of special mention.

All other content below highlights the significant changes, new feature introductions or other alterations that have occurred in the bank's digital banking channels in the period 7 November 2015 to 23 February 2016 inclusive.

There were no significant changes in the bank's offering in the channel, and observed change was primarily confined to content updates - particularly for product information (though not product applications). The following screenshot is taken from behind the customer password, and notes all of the channel's recent updates and changes - all of which were implemented prior to 7 November 2015, the date of our earlier audit. Below are screenshots taken from old product information screens, and the more recent versions (in that order), both in front and behind the customer password. 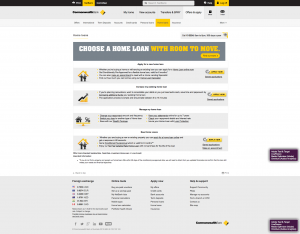 The bank also updated a number of its lending calculators, altering the design whilst retaining the features and functionality. Below are screenshots of the old design followed by the recent updates.

How Much Can I Borrow Calculator. It is not clear if this was a new feature, though it was noticeable that the bank has altered the functionality of their website to respond to the navigation of the user. For example on arrival at the bank's homescreen today we encountered the screen shown below. However, after navigating to the bank's credit card screen and returning to the homescreen, we noted that the homscreen had altered - removing the carousel of three different product promotions top of screen, leaving only one static promotion in relation to credit cards as shown below. The bank was also promoting a survey it was conducting at the time of audit, and we encountered this via a splash pop-up whilst navigating around the website. All survey steps are shown in the screenshot below. 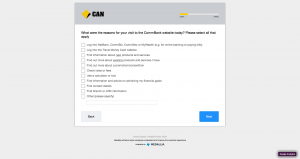 The bank most recently updated its app on 7 January 2016, introducing bug fixes. Since our audit in November 2015 the only feature of note that the bank has introduced is the ability to activate a Travel Money Card in app, and order a new one. Having not previously been a holder of a Travel Money Card, iSky Research set about applying for a new card in app only to discover that the app redirected us to a web browser session - as shown in the screenshots below. The bank was also promoting the Tap and Pay feature of its mobile app, on the Commonwealth Bank web homepage in conjunction with a promotion for the bank's Everyday Account. Copies of the ad from both the desktop and mobile web browsers are shown below. Upon logging into the bank's mobile web banking channel we were greeted with a message advising us that the bank would soon be discontinuing the channel, and advising us to access the Commbank mobile app. This was the first time that iSky Research had audited this app for a Cumulus update, and we encountered an app that we felt was heavy on design and light on features and functions, perhaps reflecting its two-star iTunes App store rating. The bank most recently updated the app on 15 December 2015, though only to introduce bug fixes.

Overall the app had less features and functionality than the bank's mobile banking app, noteworthy absences were the card locking feature and cardless cash withdrawals at ATMs. Though one feature it did have that was absent in the bank's mobile app was 'Savings Tracker'.

Savings tracker is in essence a spending vs income aggregator, based on the amount of income that the customer inputs into the app (reflecting their salary). The screenshots below demonstrate the key steps and features of savings tracker. 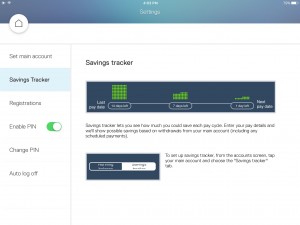 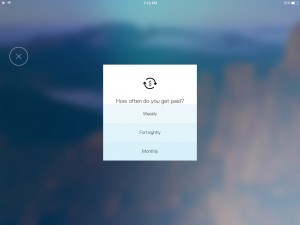 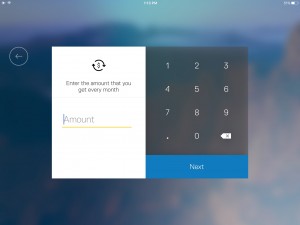