When we first came across ASB's Clever Kash elephant last year we were very excited by what we saw.

Announced in September 2015 the ASB Clever Kash elephant is, in short, a digital money box for the cashless society - targeted at younger generations, with the intent of teaching children about money and savings in an increasingly cashless world (well, cashless New Zealand at least). In a September 2015 interview with Stuff.co.nz, ASB CEO Barbara Chapman said "Parents are telling us they're finding it challenging to teach their children about the value of money as they don't tend to use cash and coins for everyday purchases."

The article goes on to note that a survey commissioned by the bank found 96 per cent of parents believed that teaching their children money skills was important. However, nearly two thirds said they were struggling to do so.

"Clever Kash is our solution to this challenge in an ever-evolving digital era," Chapman said.

Clearly considerable thought has gone into the development of Clever Kash by the bank, demonstrated not only by Chapman's comments, but also by a development video posted by ASB - showing the genesis of the Clever Kash elephant, as seen below.

Our interest and excitement at the potential of Clever Kash has only been compounded by its recent awards. ASB, along with ad agency Satchi & Satchi took multiple awards at New Zealand's top creative awards event, the Axis Awards last month. The awards included the Digital & Interactive Grand Prix, Five Golds, 2 Silvers, a Bronze and the events highest honour, the Gand Axis for their joint Clever Kash innovations.

This is backed up by some fantastic promotional and marketing content found on YouTube, a must watch for anyone working in digital banking, advertising or marketing. Our favourite video is found below.

Thanks to announcements by the bank, and from what we have seen in the latest updates to the ASB mobile banking app, we know that the first edition of Clever Kash is now in the marketplace and being tested by families across New Zealand.

We have also been able to take a look at some of the app based features of the Klever Cash service, thanks to a recently released update. As the screenshots below demonstrate, users will be required to connect to the Klever Cash elephant via bluetooth on their ASB-enabled mobile phone. We had been hoping the elephant would also be able to connect via wifi - but this feature now appears unlikely. 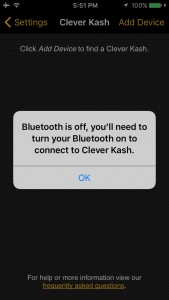 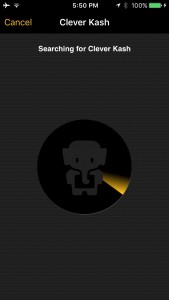 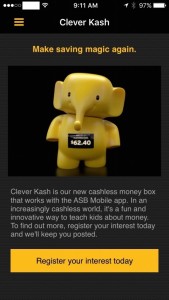 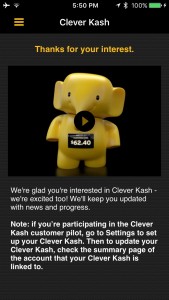 The bank has announced that it will continue to release and test additional features with select customers over the next few months, and that 37,000 people have registered their interest in Clever Kash to-date. However, it has not given a firm date for a general release, and discussion in the media has varied from mid-to-late 2016.

So, with great expectations and in heated anticipation, we continue to wait for the elephant to enter the room.